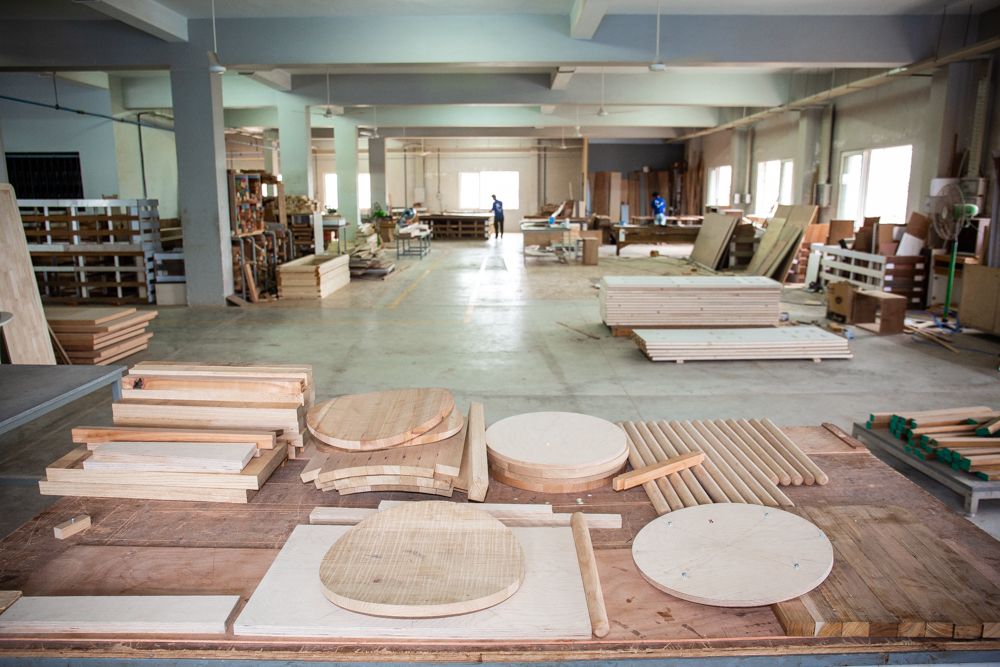 Anna Sofie Juul, a Danish cabinet maker, joined the Ca’lyah team and travelled to South India to work side by side with an all-male group of traditional craftsmen. Here, our vision of cultural exchanges proved to be challenging and rewarding – and through hand gestures and respect, the work shows us the way towards a better way of producing furniture.

Cultural plurality expressed in design is our quality stamp. When navigating a process defined by differences, an open mind and respect are our essential tools. Armed with patterns, prototypes, and a very special calliper, the Danish cabinet maker Anna Sofie Juul travelled to the Tamil Nadu region in the southern part of India, to work – as the first woman – side by side with the skilled craftsmen. Together, they brought the Tranquebar collection to life by joining forces and learning from each other’s experiences.

Back in Denmark, Anna Sofie Juul works at the renowned Danish company PP Møbler (Furniture). Just after graduating her training as a cabinet maker, Sofie was invited to participate on behalf of  PP to help develop the Tranquebar Chair for calyah with designer Boris Berlin. The multi-cultural project at the time seemed like a wild vision, but one that she was willing to embrace.  Since she began as an apprentice with master craftsman and second generation owner  Søren Holst Pedersen six years ago, she has produced some of the greatest classics of Danish furniture – from Hans J. Wegner’s renowned easy chair The Peacock to modern classics from designers such as Søren Ulrik Petersen – with a quality and a sense of craftsmanship that few other companies can adorn themselves with. The family-owned joinery workshop, dating back to 1953, are internationally recognized for their meticulous precision, high quality and uncompromising approach to craft. From day one, Anna Sofie Juul was taught how one does not skip where the fence is lowest when creating furniture that will last for a lifetime and be passed on through generations. With nothing but early prototypes, she embarked on the journey of working with designer Boris Berlin to make the design of the Tranquebar collection tangible in sketches and drawings. Drawings that along the way were almost lost –– not in translation, but in transit on the flight to the Tamil Nadu region.

Hand gestures as the most precise form of communication

When arriving at the factory, 10,000 kilometres away from her usual workshop in Allerød, Denmark, she and the team were soon to realise that language was the least of their obstacles. To ease the process, the team had a translator to help them communicate precisely. However, working with their hands, they discovered that their own body language was both quicker and easier than the words translated by the language expert. As it turned out, the movements of the hands and their shared skillset were much more effective ways of exchanging ideas.

Especially once the most fundamental differences were out of the way, such as how to express ‘yes’ and ‘no’, Anna Sofie Juul says: “In India, ‘no’ is expressed by nodding the head up and down, and ‘yes’ from side to side – the opposite of what we do in Denmark. I kept forgetting this and got quite confused when asking them if they understood what I said, and they responded with ‘no’.”

The factory had chosen two of the most experienced craftsmen for the project, the oldest and the one that had been there the longest. “They joked around saying one of them could be my grandfather. There was a very friendly and loose tone, which suited me perfectly. After finishing a day’s work, they listened to Indian songs about lost love from the 1960s on his old Nokia 3510 phone, and the atmosphere was wonderful. It was the beginning of new friendships and a fantastic experience,” Anna Sofie reminisces. 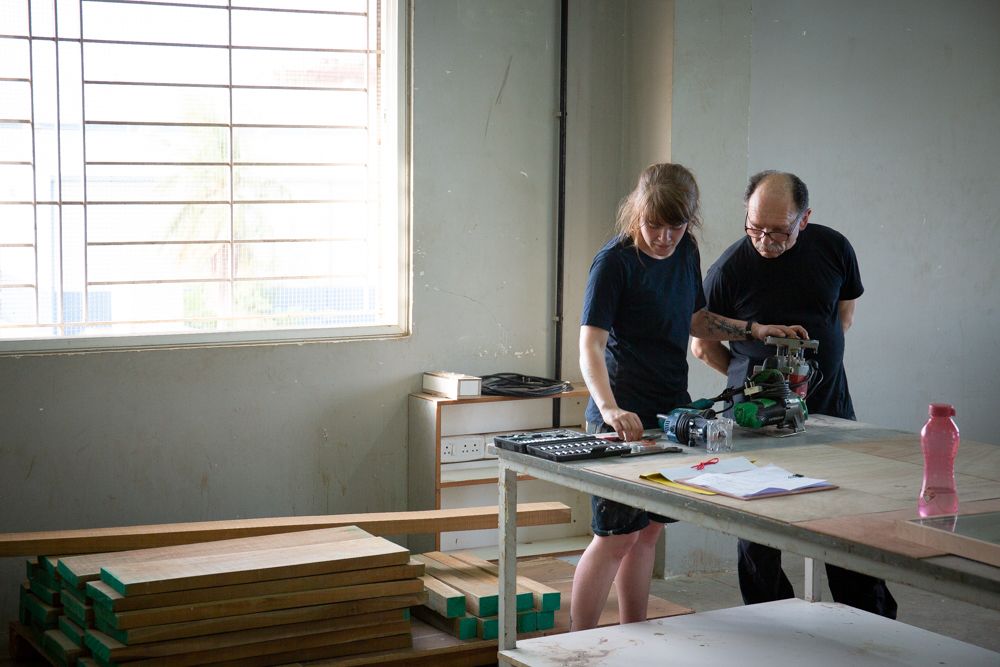 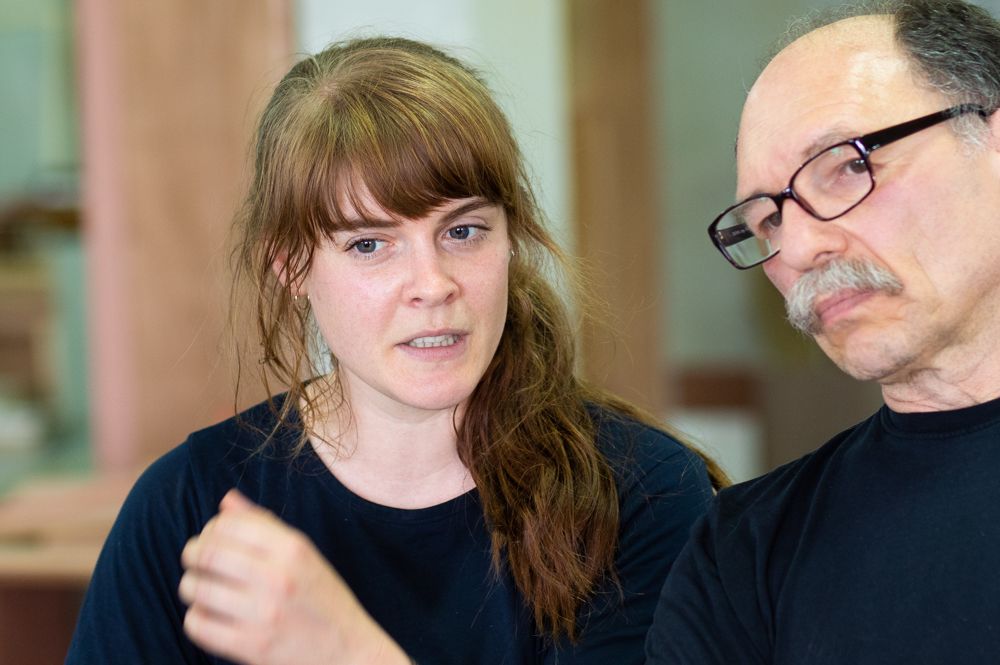 The Tranquebar Chair was the first prototype project and a new experience for Anna Sofie, who in the process she thus had to both learn to develop the prototype and pass her thoughts, specific dimensions and how it best could be produced – a process she really learned from. This wasn’t the only learning experience though. Where in Denmark, Anna Sofie was used to a more holistic approach, she discovered that here they are specialized in individual parts – operating one machine, having one metier instead of an overall, general approach. Working together, the Danish-Indian team discovered how it wasn’t a process in which one tradition would become prominent; they needed to invent a third, a way of making the two traditions merge and transform into a new practice. This was a process of surprises and unexpected changes. Even technical drawings with precise measurements and instructions would have to be altered when applied in a context where things are done differently. In Denmark, Anna Sofie Juul was used to working with technology – in India, the artisans work according to tradition. Forced to think outside the box, Anna Sofie Juul learned how limitations foster creativity. So, after adjusting the prototypes to the situation, they started working together and despite the challenges, the team paved the ground for a great collaboration based on their shared love of the materials and the work. 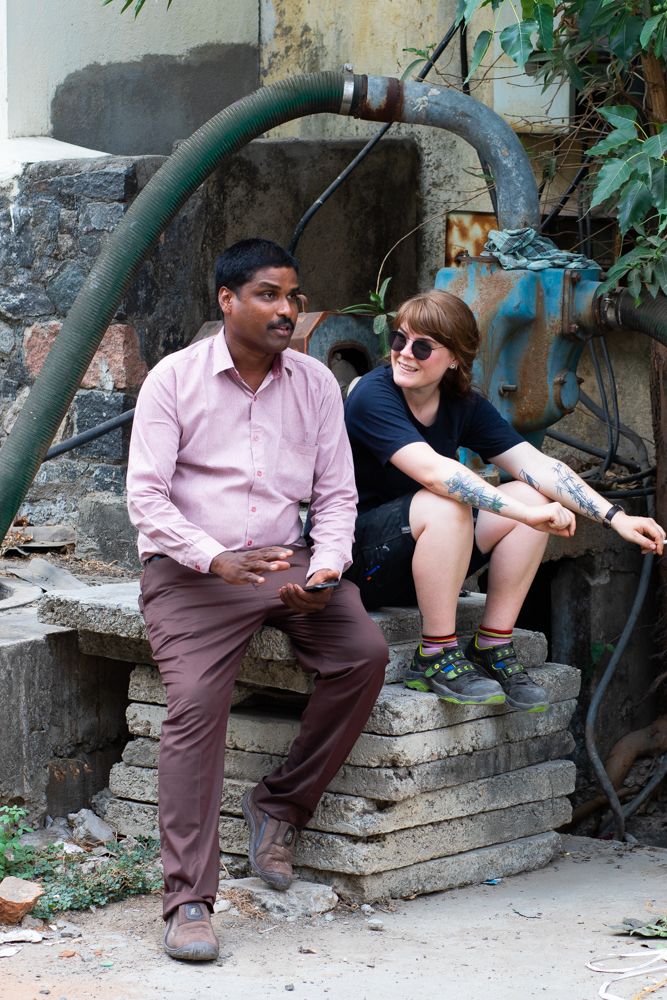 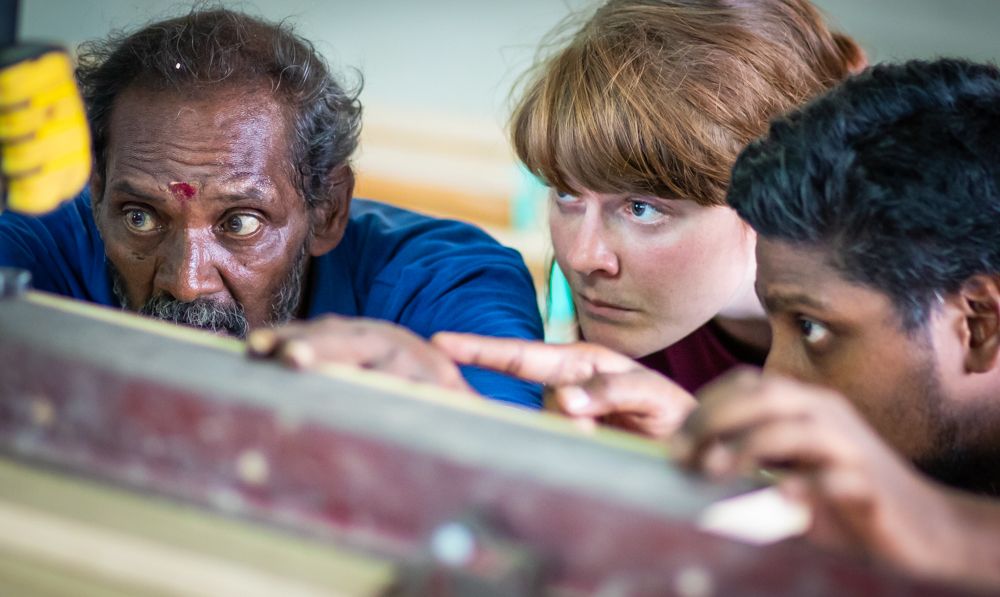 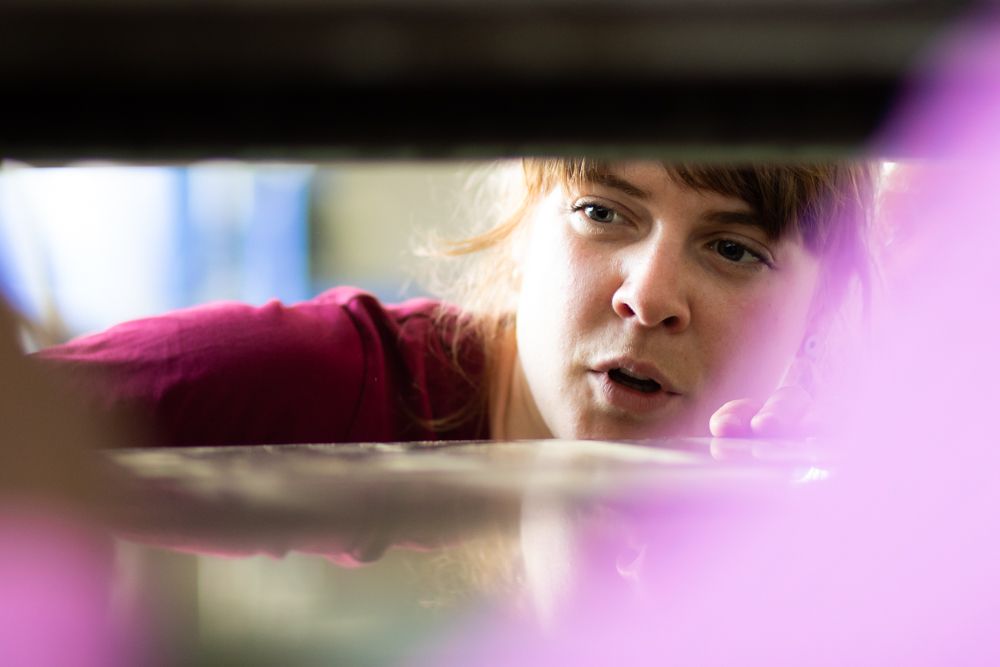 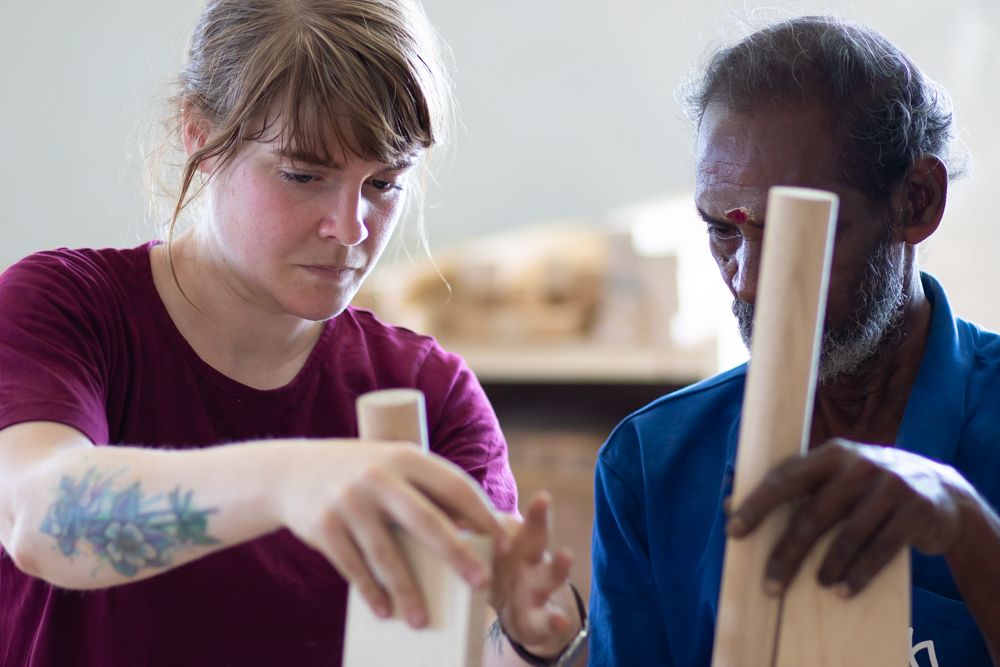 Different experiences for a shared goal

Ten days, Sofie and the rest of the Danish team spent in the community, working long days and continually challenging each other’s views and ways of doing things. Today, those initial dialogues are a concentrate of the Ca’lyah vision – empowering and learning from each other to create something new: a more sustainable – economically and socially – production, and ultimately a better world.

“What captured me about working with Ca’lyah on this project was to sense how these cross-cultural collaborations could nourish a craft that, in some areas, was dying, to make it flourish. At PP Møbler, my master was aware and implemented environmental approaches long before it became popular talking about FSC verification and CO2 neutrality. At the workshop we fire up with wood chips from our own production to the extent possible and PP Møbler planted a forest of Nordic woods like ash, cherry and oak in the local area. For them, for me and for Ca’lyah in particular, it’s about a lot more than just making furniture,” Anna Sofie Juul says. “I experienced the vision firsthand. Ca’lyah is not just about producing furniture. It is a process of adding different kinds of experiences to – together – reach a goal. The way we were able to empower each other adds a new layer to Boris Berlin’s design and each final piece of furniture, I think”. When Sofie left after ten intense days, she gave the local craftsmen one of her measuring tools used during their work as a farewell present. A sign of respect and friendship, one cabinet maker to another.

At Ca’lyah, we are proud to have made this story possible. Each piece of furniture and design is not just unique because it has been handmade, but due to the way in which it was handmade.

Through mutual respect for traditions and skills, the design of the Tranquebar collection was created in a whirlpool of different perspectives.

The collaboration between Søren Holst Pedersen, Anna Sofia Juul, designer Boris Berlin and the craftsmen in South India served as a successful pilot for Ca’lyah´s craft skills academy programme. With a focus on creating opportunities for women and the development of the next generation of skilled crafts men and women in India, Ca’lyah will expand the programme post Covid-19 lockdown in early 2022.